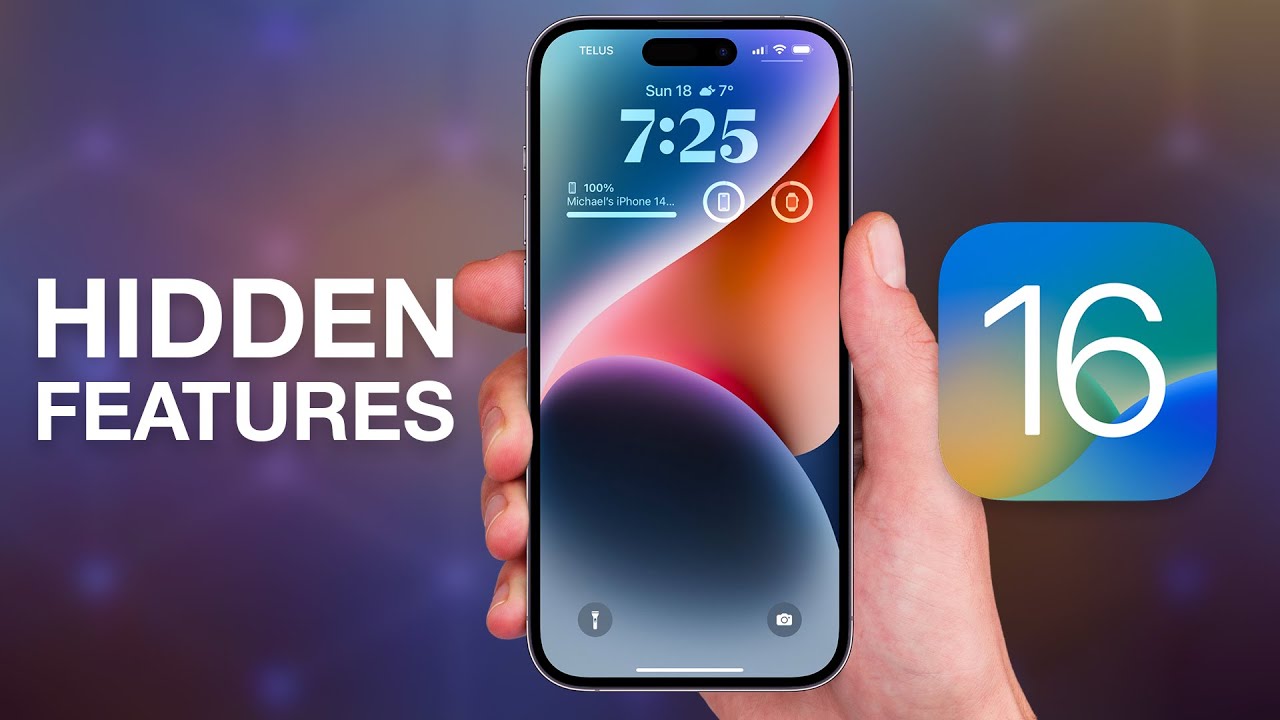 Less than a week ago, Apple released the latest version of its operating system . Probably, you will have heard so much about its new features that you will know how to list them one by one. Now, here we leave you 13 hidden features of iOS 16 that you surely did not know about .

Undoubtedly, the new iOS 16 comes loaded with notable improvements for iPhone users . From customizable lock screens to Dynamic Island, through the expected keyboard with haptic feedback or the new features of Mail.

The question is… do you really know all the functions that your iPhone has? You do not need to be doubtful, because the answer is no. Therefore, today we are going to present you with a series of tricks and tools that are worth discovering.

Here’s one of the lesser-known features of iOS 16: the ability to view the music player in full size from the lock screen .

When you’re listening to music and you lock your iPhone, a small player opens that allows you to view the album cover, stop, go back, or skip forward. From now on, you can click on said cover and make the music player occupy the full screen .

Also, it is compatible with any music player , beyond Apple Music and Spotify. Surely, for some users this novelty is totally secondary; for others, it will be one of the best features of the new operating system.

Without a doubt, the horizontal Face ID function has been hard to come by. However, Apple has finally announced the arrival of this new feature with iOS 16, which will be compatible with iPhone 13 and later models .

Surely you have ever wanted to unlock your mobile in the car, while it was acting as GPS to get somewhere, but you couldn’t do it because Face ID only worked vertically.

Another example? When we wake up and reach for our cell phone without even knowing how we are holding it . In this aspect it is also an advantage, since we will identify ourselves faster by not having to search for the vertical position.

How many times have we invited someone home, they have asked us for the WiFi password and we have had to go to the router to be able to provide it. Not to mention how terrible it can be to have to dictate that hieroglyph.

This is over . With the new iOS 16 operating system, the process is simplified. From now on, discovering the password of the WiFi network to which you are connected will be as easy as accessing the settings of your iPhone .

Once inside “Settings” , you will have to go to “WiFi” and search for the network that interests you. When you find it, click on the information button and tap on the hidden password . The last step, before its disclosure, will be to identify yourself with Face ID or Touch ID.

Custom audio for AirPods and Beats

One of the best hidden features in iOS 16 is meant for your ears. And, thanks to Personalized Spatial Audio, you will be able to enjoy a listening experience adapted only to you .

To do this, you will need to have an iPhone with the iOS 16 operating system and a TrueDepth camera , specialized in capturing facial data by analyzing more than 30,000 invisible points. Once you sign in with Apple ID, you can use it on these devices :

Without a doubt, this is one of the innovations most claimed by Apple users. It already existed at the time, but it was eliminated due to lack of space with the appearance of Face ID.

The iOS 16 operating system brings this feature back, making it possible to view the battery percentage from the status bar , without having to access the Control Center. In addition, the icon changes color depending on the battery status : green while charging, red when low, and white in normal status.

To activate this option, you simply have to access the “Settings” of your iPhone, look for the “Battery” option and select “Battery percentage” . You will have to follow the same steps if you decide to disable it.

Unfortunately, this functionality will not be available on all phones. Here you can find out which iPhones are compatible with the new battery indicator . Is yours one of them?

Protection of hidden and deleted photos

All phones allow you to delete images from the gallery , which usually remain stored in a specific folder until they are permanently deleted. Indeed, this is not at all surprising.

However, iPhone has two albums within its Photos app: Deleted and Hidden . Both are available in both iOS 14 and iOS 15, but the novelty comes with the protection provided by the new iOS 16 operating system.

It will be essential to identify yourself through Face ID or Touch ID to access hidden photos and recently deleted photos. Thus, anyone who has access to your unlocked mobile will not be able to gossip any of these albums without your permission. Activate it by entering “Settings” and then “Photos” .

Until now, the side button of the iPhone had the classic function of locking the phone and also ending an active call immediately.

With the arrival of iOS 16, users will have the ability to disable this useful, but sometimes inconvenient feature. You can avoid these accidents by entering “Settings” , then “Accessibility” and finally “Prevent ending calls when blocking” .

Once this is done, when you are in the middle of a phone call and you accidentally press the lock button, the only thing you will achieve is that your screen turns off .

If you have an iPhone or iPad and a Nintendo Switch, the arrival of the iOS 16 operating system will come into your life like a breath of fresh air.

PlayStation 4, PlayStation 5, Xbox One, Xbox Series X|S… all these consoles could already be connected to Apple’s phone for a long time. Now, you can pair the Nintendo Switch Joy-Con controllers to the iPhone or iPad through a very simple process.

First of all, take your Joy-Con controller and hold the small black button that is used to pair devices. Do this until the little green lights start blinking. Then, go to the “Settings” section of the iPhone, open the “Bluetooth” tab and finally select the Joy-Con.

Do you have any order-related knocks? If the answer is yes, then surely you would love to have perfectly organized playlists .

Well, the new iOS 16 operating system may have made many people’s dreams come true. Starting now, Apple Music users will be able to sort their playlists by song title, artist, album, and even release date .

You can do it from the Apple Music app itself, accessing any of your playlists and clicking on the three dots that appear in the upper right corner.

Cleaning photos and contacts is always torture , especially if you have to do it because your mobile phone is about to explode due to information collapse.

Now, the new version iOS 16 makes it a little easier for you. The Photos application creates a folder, called “Duplicates” , where all those images and videos that are taking up storage space twice will be stored.

As if that were not enough, we find the same modus operandi in the contact manager. When you access your Contacts, you will see a header that says “Duplicate Contacts” at the top . From there you will be able to link cards or delete repeated telephone numbers .

We continue for bingo with the theme of storage. What is your record of screenshots saved “just in case” or for a reason you don’t even remember anymore?

iPhone has always given a lot of play to screenshots , allowing you to save them in the Photos app, as a quick note, and even in the Files section. From now on, you can do one more thing.

If you have a smartphone with iOS 16, you will have at your fingertips “Copy and delete” the screenshot in question. A function unknown to many, but tremendously useful: it is saved to the clipboard temporarily and, once you have pasted it where you want, it is automatically deleted.

Thanks to the built-in intelligence of Live Text , text can be recognized in any image captured with iPhone. With the new iOS 16 operating system, new features are available.

Get ready to translate texts, convert currencies and measurements with an ease never seen before. To do this, you simply have to access the Camera app and point to what you want to convert. When the Live Text icon appears, tap on it, long press on what you want and select “Convert” .

In addition, Live Text now also recognizes text in videos , which can be stopped at any frame and request the translation. Finally, we can also ask Safari to translate a page and the text of the images it contains.

Safari, Apple’s quintessential browser, is the best way to browse the Internet with any of the company’s devices. However, you have a limit of 500 open tabs .

It is true that this is a fairly high figure, but the problem comes when you want to find a specific tab that you had left open. In fact, you can spend hours trying to find the right one, without any success.

Therefore, with iOS 16 you now have the possibility to “Pin tab” . This means that this tab will move to the top of Safari, where a small preview will also appear, and you can easily access it without having to search for it.

Sometimes we are not aware of everything we can do with our smartphone, in this case with an iPhone. After knowing these 13 hidden features of iOS 16 , do you think you will get even more out of Apple’s new operating system ?